THE GOD WHO KNOWS

My focus through this season of Lent, the beautiful walk towards Easter with all it's significance, is on the greatness of God.
Our true fulfillment and future is not found in what we, or any other person, thinks, but in what God knows.  Our way forward is IN Him and WITH Him, trusting that He truly is the beginning and the end and is the only One who sees the big picture.
I do not know how to build with my own hands, only with my heart.  It is a quiet place filled with His love and presence in which all things are possible and nothing too difficult for Him.
The prayer is not in the asking, it is in the knowing, and therefore it is not hindered by my finite view of things but safely in the hands of the One who is infinite.
In this place He truly becomes my Way, Truth and Life.
Psalm 46:10 "Be still and know that I am God; I will be exalted among the nations, I will be exalted in the earth."
Psalm 48:14 For this God is our God for ever and ever; he will be our guide even to the end.

For each of us as we stand before you in this season Lord, release us from the thoughts and ideas of ourselves and others, and lead us into what You KNOW is Your plan and purpose for us.  Pour the water and oil of Your Spirit over us and cause us to be flexible Lord - clay in Your hands - so that You can shape and place us as You please.

Posted by Judith Grobelny at 4:10 PM No comments:

‘A CLOUD THE SIZE OF A MAN’S HAND’ 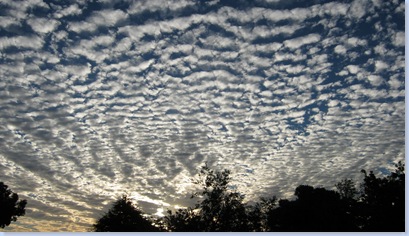 Recently when praying for a friend I heard the Lord say “a cloud the size of a man’s hand”. It sent me back into the story of Elijah to explore what God was drawing to our attention in this particular time.

That night I took the photo above of the clouds in the sky at sunset.

And Elijah said to Ahab “Go, eat and drink, for there is the SOUND of a heavy rain”

…… but Elijah climbed to the top of Mount Carmel, bent down to the ground and put his face between his knees.

Elijah sat there connected to the very earth that needed the rain so desperately.

“a cloud as small as a man’s hand is rising from the sea”. Finally ‘a heavy rain came on’.

Are we asking that our ears would be opened to hear the sounds of what God is doing in the heavenly realms, not just the obvious sounds around us right now?

18:46 The power of the Lord came upon Elijah and tucking his cloak into his belt, he ran ahead of Ahab all the way to Jezreel.

Elijah had done battle with the prophets of Baal, it had been a big day, and yet when the rain came God gave him the power to run all the way to Jezreel faster than a chariot.

We are waiting for the rain which will bring God’s power into our lives in a new way.

Jezebel didn’t like it! It was immediately tested, and Elijah went into the desert, sat under a broom tree and prayed to die! “I have had enough Lord!” I wonder how many times we have said that!

At the point where all that God required Elijah to do had been done, he had experienced the backlash of the enemy’s displeasure, and he had completely run out of all his own strength, God and the angels began to move on his behalf.

The Lord sent angels to care for and FEED him, give him STRENGTH again, and MOVE him on – 40 days and nights journey to Mount Horeb – the MOUNTAIN OF GOD.

It’s important to observe the pattern here for it repeats in our own lives.

Elijah did great exploits, but they were nothing compared to what God did, and what God had prepared for him on the mountain.

On the mountain top God revealed Himself to Elijah in a new way, and He re-commissioned Elijah to go out again. There was a change of level and function of operation in the Lord’s call on his life.

We must be prepared to walk on the mountain top, in the valley, through the desert, and back to the mountain top again – it is the way forward. We cannot afford to despise any part of the journey or working of God, but embrace it as part of the His life in us.

The night I took the picture the whole sky was filled with little clouds 'the size of a man's hand' - may we have eyes to see, ears to hear, and hearts to understand His working in our lives and in the season we find ourselves in.