…being confident of this, that He who began a good work in you will carry it on to completion until the day of Jesus Christ. Philippians 1:6

God completes what He has begun, that is more important than what we think we can do!

As I sat praying about the year to come, and thinking of past visions and words He has given, that the Lord was saying it was ‘time to rest and get ready’.

Rows of soldiers wearing old fashioned amour – the sense is that what they wear and walk in is not new but very foundational and strong.

These soldiers are happy, and instead of traditional weapons each one is carrying a branch covered with fresh green leaves, they look ‘evergreen’ as if they will not wilt or drop.

On each side of the river stood the tree of life, bearing twelve crops of fruit, yielding it’s fruit every month. And the leaves of the tree are for the healing of the nations.

The branches the soldiers carry are for the ‘healing of the nations’ many will soon be sent out. Wait for the Lord’s call and sending, it will be right on time and the choice of destination will be His alone.

We have experienced ‘shaking’ in both the natural and spiritual realms. I see that those who are part of the church that the Lord Himself is building will stand in Him and in His strength alone.

Their earthly roots have been shaken loose in order that the Lord can put His living stones in their right places. I feel that the shaking in Christchurch has been a prophetic picture in this regard – the central place of worship for each of the major denominations was severely shaken.

Felt the Lord then said there was more to come but right now I should sleep … maybe a dream! When I awoke I had to attend to email and a dream that had been sent to see if the Lord would give me an interpretation. The content of the dream confirmed that the Lord’s visions are being outworked in His own way and plan causing us to be vulnerable but the unexpected is leading to the purposed destination.

MOVING IN THE UNDERGROWTH

I saw God’s people moving unnoticed through low bush and scrub. This was God’s safety and protection and it was a very quiet and beautiful place. HIS movement is currently hidden and will remain that way until He wants it seen. There is a sense of great connection with birds, animals and all of nature – this would seem a very good and natural place for us as Kiwis!

Though moving beneath the scrub, the direction is always upwards towards the top of a mountain, and even there the scrub and bigger trees provide safe cover.

I see again the ongoing picture of a great eagle flying over the tree tops and drawing flocks of smaller birds up out of the tree cover to fly high and free towards a great outpouring of light. (See Vision of a Higher Place below).

It was He who gave some to be apostles, some to be prophets, some to be evangelists, and some to be pastors and teachers, to prepare God’s people for works of service, so that the body of Christ may be built up until we all reach unity in the faith and in the knowledge of the Son of God and becoming mature attaining to the whole measure of the fullness of Christ. Ephesians 4:11 and onwards)

The whole of this reinforces the sense of God’s building out of the eternal plan He alone knows. This is a time to place our desires and plans on His altar, putting them safely in His hands as He alone is able to bring this to completion in His Son. It is a place of faith and trust in God alone.

I feel we need to stay quiet, stay low and hidden in Him as something momentous is being outworked in and around us. I hear Him saying “And so it was ……” which to me speaks of a time of fulfilling what God has spoken to and through His true prophets. I believe it is a time when He is raising up His standard in the face of much of what we see in the natural in the earth in this time.

I can feel the raw newness of what is ahead. It is raw, fresh, and edgy in a way we haven’t felt for quite some time. It looks like bush/forest, wet from rain, when the sun comes out. You know it is beautiful but not comfortable. It is beautiful but still being viewed from a distance and not yet engaged.

I see the eagle swooping and dipping in the clear blue sky above all of this, seeing it’s surface but not knowing what is hidden below the shining, glittering, surface. No space to land has appeared.

As the eagle swoops over the forest, many smaller birds begin to emerge and also fly around above the trees, as if they are being awakened to their ability to do so. Their numbers increase until there is much activity. “Cannot see the wood for the trees” comes to mind.

It seems something new has begun but it is not visible in the midst of our current life and circumstances. I see a very strong prophetic call being released to call people up higher. As they rise to this call and seek all that heaven offers them, they will move into a clear space and begin to see and move in the purposes of God in a fresh and new way. There is a clear distinction here – the call is to the purposes of God, not of man and this will not be found by man’s direction, but by the leading of the Holy Spirit.

I felt to read Psalm 139 and is seems to give good direction for this journey which is INTO the Lord.

As I watch the flying eagle, smaller birds, and glistening treetops, the sun appears to shine continually brighter, and the sky becomes filled with golden light.

The scripture that seemed to cover what I was looking at is found in Ezekiel 43 v 2:

…and I saw the glory of the God of Israel coming from the east. His voice was like the roar of rushing waters, and the land was radiant with His glory.

There are many who are feeling the tug and pull of change right now, circumstances radically altered. I believe the Lord is beginning to do His building, and calling those who will come, wait on Him, and serve Him out of a place of His rest. 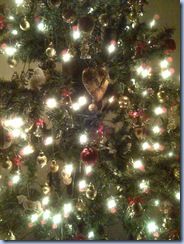 It's THAT time of year again when all reason seems to fly away on tinsel and glitter and materialism reigns.  I love the family side of Christmas, the time together is full of surprises, food, and laughter, but it's sad to see the long check-out lines and over-laden trolleys, and the stressed faces of those who are trying to make their few dollars go a very long way.

Yesterday I spent the morning with some people who are struggling to get their heads above water and to deal with the hand life has currently dealt them.  We talked about what it meant to really live.  It isn't about what we do or don't have materially and externally (although those things help keep us comfortable) but more about what is happening on the inside of us.

It is so important that each of us is able to live life, to live out of something internal and untouchable that sustains us through whatever we encounter day to day.  It is a choice - to live minute by minute and hour by hour to the full, not waiting for all the other things to fall in to place but making a decision that we will grasp and live the life we have this very moment.

The next stop was with a solo mum and her six week old baby - taking the remains of our banana cake and having a cuppa and a catch up with her.  While she fed the baby we re-arranged her living room and folded washing for her - all those things new mums don't have time for.  There were lots of laughs and a tidy home at the end of it all.  Nice to wave goodbye to a smiling mum and a contented baby.

Those things don't sound much, they weren't difficult to do, but faces lit up and hope and joy increased in those lives as a result.  The very hope and life that came to earth in a humble place as a free gift to each of us was passed on once more.  It didn't cost anything except time, and came out of the abundance of what has been given to each of us.  Is this not what it means to live?

My hope this Christmas is that many will choose to live in the fullness of all we have been given and then let it overflow into the lives around us.  We have been given a priceless gift that cannot be taken from us, and it needs to be passed on and ignited in the lives of others.  We have the gift of Life Himself, we celebrate that He was born, and we honour that gift by sharing it with the very people He visited when He walked on this earth.  It is a cup of water for the thirsty - how many free cups of water can we give away this Christmas I wonder?

Posted by Judith Grobelny at 12:37 AM No comments: