Recently I had an unusual picture while praying. I saw a person leaping from one piece of cracked ice to the next. These thin pieces of ice were floating on deep water as they melted and rapidly became thinner and more fragile.

I held my breath watching this picture, knowing that at any moment the ice was going to crack and the person fall through it. That person could first and foremost be myself!

Obviously the question arose; why this picture and why see it now?

It seemed that the implied message was that we are moving now into a new season, and into much deeper waters. To be able to swim and survive in deep waters we need to be unencumbered and have strength for the long haul! If we fall into deep water we have to discard heavy footwear and clothing - in fact anything that isn't absolutely necessary - in order to lighten up and swim well.

How did this relate to the guy on the thin ice? Well, it seemed that he thought he didn't need to do much more than jump from one piece to another in order to survive, and wasn't prepared to take some time to take stock of his situation or the changing climate.

At the beginning of this year the Lord encouraged us to 'seek wisdom' for this time, and perhaps wisdom would dictate that changing seasons are time to take stock and see that we are well prepared for the next one.

Maybe these are the times to make sure the foundations in our lives are strong enough to take us through the coming changes. If you are going to add another level to your house you first check that the existing foundations can take it's weight.

I wonder if in the Christian family we are looking at the outworking of something called The Peter Principle, which Wikipedia describes like this:

The Peter Principle is the principle that "In a Hierarchy Every Employee Tends to Rise to His Level of Incompetence." While formulated by Dr. Laurence J Peter and Raymond Hull in their 1968 book The Peter Principle, a humorous treatise which also introduced the "salutary science of Hierarchiology", "inadvertently founded" by Peter, the principle has real validity. It holds that in a hierachy, members are promoted so long as they work competently. Sooner or later they are promoted to a position at which they are no longer competent (their "level of incompetence"), and there they remain. Peter's Corollary states that "in time, every post tends to be occupied by an employee who is incompetent to carry out his duties" and adds that "work is accomplished by those employees who have not yet reached their level of incompetence".

I am not suggesting that we should live in a hierachy, but that some of what this suggests can apply to our personal lives. God uses us all for His purpose and is not looking for perfection, but I do believe He is always looking for flexibility and willingness to be clay in His hands.

If the ice is going to melt under my feet, then I want to be able to swim.

Posted by Judith Grobelny at 2:22 PM No comments: 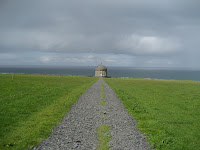 So often we come screaming to the Lord, overflowing with urgency and agenda, desperate that He will move and fix this thing that we see cannot be fixed. We move with a flurry of desperation and very little faith.

We forget that He is not feeling urgent about it, neither is His composure disturbed, BUT AS WE ENCOUNTER HIM our urgency decreases, our agenda falls away, and we are caught up in heaven's atmosphere and the KNOWING that our God reigns, He is on His throne and very much in charge. We come into His presence and it changes us, then the things around us begin to change!

Can we learn to carry the thoughts of heaven in our hearts, so that when the urgent situation arises, we turn instantly to the source of our help, our hearts quiet with faith that He knows and He will do whatever is necessary in His great eternal plan. Our work is to continue to 'remain in Him, and He in us' in order that the cry of our heart will be heard and the answer will come.

What is the cry of our heart? YOU ARE GOD, You have said 'I AM' and right now I agree that you are indeed are who you say you are. I believe in You, and I have faith in your great power and ability, in the fact that YOU ARE ABLE TO DO MORE THAN I CAN ASK OR IMAGINE.

All creation groans waiting for the manifestation of the sons of God. Who might these sons of God who are led by the Spirit of God be? Maybe they are those who KNOW their Father and have great trust and faith in His goodness, His greatness, His power. Those who are able to remain in His presence and therefore reflect something of His life and light into a dark world.

I wonder if those He will send away from Him because He does not know them will be those who have never stopped moving in urgency and agenda, and have therefore missed the wonder of seeing who He truly is, AND what He can so wonderfully do?

These are the days when we will need to know our God in order to stand and survive in the face of great challenges. Lord we ask that You will reveal your trustworthiness to our hearts, and secure us in the knowledge and love of You; helping us to rest in You and let go of our urgent agendas. Thank you that YOU make all things beautiful in YOUR time, that nothing is hidden from your gaze as your eyes range to and fro over the earth looking to show yourself strong on behalf of those whose hearts are turned towards you. We are lovingly grateful.

Teach us Lord to be still and KNOW that You ARE God.

Posted by Judith Grobelny at 5:02 PM No comments:

Many years ago I read some books by Alexander Solzhenitsyn that impacted me greatly.

This week the author died, leaving a legacy of having persevered under great difficulties, and holding firmly to what he believed regardless of all that was taking place around him.

I have kept a copy of the following in the back of my bible, and it seems a good time to share it now with any of you who wander through here! May it encourage and inspire us all.

I LOOK BACK IN WONDER (Alexander Solzhenitsyn)

When my mind parts in bewilderment or falters,

When the most intelligent people see no further than this day's end, and do not know what must be done tomorrow,

You grant me the serene certitude that You exist and that You will take care that not all the paths of good be closed.

Atop the ridge of earthly fame I look back in wonder at the path which I alone could never have found, a wondrous path through despair to this point from which I, too, could transmit to mankind a reflection of your rays.

Posted by Judith Grobelny at 11:24 PM No comments: