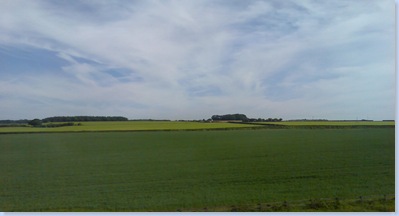 As we look at all that's taking place around the world right now it becomes more apparent each day that we need to know who we truly are, and how we will live and maintain our peace in the face of what we see!

Sometimes I think we forget that although we are born of our natural parents, by God's intention and design, this natural birth is wrapped in something far bigger and wider in it's reality.  To recognise and engage with the author and designer of our lives is to move outside of our limited understanding and into the path of the One who lovingly works to be connected to those He created. We are able to enjoy the benefits of His tireless watch over His children, and His leading into things that are eternal rather than simply contained in the here and now.

We move beyond our natural birth into a new kind of life, one that gives us new eyes to see, ears to hear with, and hearts able to understand the love and wonder of a life filled with far greater promise than we had ever imagined.

In this process we begin to find the self we were truly created to be, leaving behind the false self - an image woven by our desire to obtain the approval and acclaim of men and women whose expectations and demands weigh heavily upon us.  We move beyond the ideas and expectations that are human and limited.

This deeper walk with God takes us deeper into who He truly created us to be, not what we think, but what He actually knows and has always known.  The search for this takes His children down many paths, most of which are dead ends, and some stop there.  However, there is a need to keep walking and when we find ourselves gazing at a wall it's time to turn and look around for Him again.

The depths of this search can feel dark and lonely to our souls, but our spirits are being constantly and steadily awakened to this great light that shines in the darkness.  Jesus said "I am the light of the world, whoever follows me will never walk in darkness but will have the light of life."  It was God's idea to let light shine out of darkness and increasingly lets this light shine in our hearts.

Jesus was the invisible made visible, and so his face was displayed in the earth for all to see.  Now that same light is reflected in our hearts and He continues to shine in the darkness when we walk in the birth of the person we were truly created to be.

This world we live in needs more and more light shining against the darkness that pours out violence, hatred and disorder around us.  Jesus said "You are the light of the world.  A city on a hill cannot be hidden.  Neither do people light a lamp and put it under a bowl.  Instead they put it on a stand, and it gives light to everyone in the house.  In the same way, let your light shine before men ...."

The end result of becoming our true selves, willing to be lights that shine in dark places, is an increase in us and in those places of love, joy, patience, kindness, goodness, faithfulness, gentleness and self-control.

It's my desire to shed the dark garments of my false self so that more light is evident.  To walk into the great promise that the plans God has for me are for good and not evil, to prosper and not harm me, to give me a future and a hope.  Those are the things so many seek not knowing that they are only found fully in being the true selves God created.

We thought we were born of our natural parents alone, but there was always this higher, wider, greater, thing going on.

Posted by Judith Grobelny at 11:18 PM No comments:

Here are a few gleanings from waiting and listening at the end of one year and as we move into a new one.  May each of you who read this blog be held in God's plan and purpose for you through this year, and know that all He has in His heart for you is GOOD.
On the morning of December 28, 2010 I woke up with the words of Matthew 5:16 on my mind:
"In the same way, let your light shine before men, that they may see your good deeds and praise your Father in heaven."
There is such a strong sense of our need to step out of the shadows and become fully what God created each of us to be.  As we live this out it brings great glory to Him.  It is true humility to embrace and live all that He desires for us, for then we are living in the Truth.
I continue to be aware of a great pathway of heavenly love and power  between heaven and earth.  It is open, but requires utter truth in the innermost parts of those who walk it.  Was this Enoch's path I wonder?
Again on 30 December I saw this same heavenly connection between God and those who will walk fully in His Truth.  It is like a highway of great substance that stands out from everything else around it and makes all else appear to have no substance at all.  It flows out of heaven and spreads out as it goes.  Moving on it towards God would be like moving upstream against the currents of the world's flow - not easy, but worth more than anything else in life.
Psalm 46:4 came to mind as I looked at this flow:
There is a river whose streams make glad the city of God, the holy place where the Most High dwells.
The whole of Psalm 46 seems important to hold in our hearts as we move into what is ahead.
oo0oo
During the night of December 28, 2010 I had a very vivid dream.  In it I was with the group of young adults in a gymnasium somewhere in the USA.  They were all in very serious training, running, exercising, doing press ups.  At the same time, some of their group had been caught up in a huge tornado-type storm and I could see them being hurled around in the midst of this as it carried them along.  One young man was very apparent and seemed to have been sucked into the very centre of the storm which was full of lightning and thunder.  At the end of the dream this young man appeared, he seemed to be the only survivor and was very battered but recovering.  It was evident that the experience had made him fit for leadership and all the others now looked to him for wise direction.
oo0oo
Twice I have been lead into 2 Chronicles 34.  King Josiah, young as he was, did well in returning Israel to the Lord - the thing that caused the greatest change was finding the book of the Law that God had given to Moses, and in reading discovered how far they had strayed from God's instructions to them.  I believe again God is calling us to pursue His Truth and His Word and use this as the plumline to evaluate our lives. In spite of all the good he had done, Josiah eventually died because he was carried by his zeal to fight a battle that the Lord was clearly telling him not to fight - our greatest strength can also be our weakness, and this needs to be watched as carefully at the end as at the beginning of our life and work.
oo0oo
Ezra 3:10 - The rebuilding of the altar.  When the builders laid the foundation of the temple of the Lord, the priests in their vestments and with trumpets, and the Levites (the sons of Asaph) with cymbals, took their places to praise the Lord, as prescribed by David king of Israel.
There are many who have been faithfully following a path they truly believe the Lord had led them to.  They have at times wondered if they heard Him right, especially as they can see so few, or no, results.  I feel that the Lord has indeed been building, against great opposition, as was the case in the time of Ezra.  The word I hear Him using is that He has established BEACHHEADS and in 2011 the result of those being established will be seen and will be cause for rejoicing - it will be an indicator that He is truly building HIS House, and there will be fruitfulness from what has been sown.
These results will be seen especially by those who have been willing to leave the froth and bubble of the shoreline and have the courage to move out into the deep oceans of His presence.  Now He will begin to draw on what has been deposited and resides deep within their souls and spirits.  They are deep wells and many are thirsty.  There have been those in the church who were not willing, or have not had the courage to move into these deeper waters, but the courageous are those who have been used to establish the beachheads the Lord desires in this time.
oo0oo
I believe that for the year ahead the Lord is encouraging us through Ephesians 6 to 'stand firm'.  He will continue to be true to His word in Amos 3:7 that He does nothing without revealing it to his prophets - listen for His voice.  In John 15:4, He is reminding us that we must remain in Him, and He in us, if we are to see fruit.  Finally in Revelation 20:2-10, He is reminding us of His total victory over the enemy.
We must never forget that God spoke EVERYTHING into being, and He never ceases to be God.
Shalom in 2011.
Posted by Judith Grobelny at 5:30 PM 1 comment: