The Tension between the Two!

Today I find myself once again wrestling with the tension between the prayerful and practical parts of my life.  I am sure others do this also, and maybe it reflects the ongoing tension that exists in this world of ours, in the 'church', in the outworking of The Life that is continuing to grow and find expression through our lives.

The picture I have in front of me is of a woman with her head stuck in heaven and her feet firmly attached to the earth, and this ongoing desire to comfortably marry the two so that existence can be a little less tense!  It feels as if there has to be some place in the middle where the two can meet and co-exist in a manageable manner.

Even as I write that, I suspect that it will never be possible and that there is a picture here of something that needs to exist to give expression to the place we stand in, a place that will only alter when Jesus Himself comes to rule and reign.

I love to sit in His presence, to spend hours in contemplation and prayer, to be in this world and, for a little time, not really of it at all.  Then out of that time there is a love set in my heart that overflows and has to find its outlet; that feels the pain, sees the brokenness, and needs to somehow engage it.

Somehow this does bring about a meeting place - where I can experience great joy as I see that His love is enough as it touches a life for a moment, as a circumstance changes, as hope is released where it previously did not exist,  This meeting, however, is momentary and not sufficient to sustain for any length of time.

Back into the hidden place I run, heart empty and open to be filled and owned again, soul in pain, spirit crying out for more of what compelled me outward in the first place.

This tension is like a wheel that constantly turns.  Yes, there is a kind of rhythm in its turning, and yes it holds me to something greater than myself as I turn, and yet there are moments when I want it all to stop.

Are we engaged without knowing it in some kind of intercession by this very life we live, and in these very battles we fight within and without?  I hear the calls to prayer - they bellow at me over the Internet - and yet most of the time it seems that this daily working out of life itself, in the context I find it, is the prayer, and it is all I can manage.  There is nothing left over for formal prayer meetings or lots of words.

This silent struggle is ongoing, 24 hours a day, every day, and brings with it moments of hope and moments of despair, moments of joy and moments of pain - a constant movement through a range of thoughts, emotions, feelings. It provokes an ongoing conversation with the only One who can answer my questions.

The sustaining force behind it all is the hub on which the wheel turns.  The One who is The Answer.  The One who loves more than I ever can.  The One who paid such a huge price to make the impossible possible.  Truly in the midst of all this Jesus remains always the same.  The Lord's presence constant and assuring.  It is His peace that breaks through the tension and takes hold of my heart again to hold is secure and move me forward into the next hour, and the one after that.  He alone defuses the tension and makes sense of it all.

In the absence of earthly fathers, or in the midst of their dysfunction, I believe we’ve tried to present a God/Father figure who fills the gap.
This gap seems huge to us, but is actually too small for HIM, so then we reduce HIM to a size we can manage.
What seems helpful is actually doing people a disfavour as we all need a very big God, just as we long for a very big functional father.
E.g. “My dad’s bigger than your dad!” This is a kid in the playground's response to someone who leans on him, but shows a basic human picture of 'dad' and how he backs us up.

We long for the perfect father that no man can ever be, and yet we already have the perfect, able, powerful, heavenly Father (who Jesus came to introduce us to) who is more than someone who cuddles and reassures us – he can fight our battles, heal our wounds, gave and continues to give us true life.  I wonder if we have been seduced by something in our comfort loving world that begins to dictate how a father should be, and is not at all what God had in mind for us?

We can be proud of HIM, depend on HIM, talk to HIM about anything at all, knowing that HE listens and loves and acts.

Our earthly fathers will only ever be a shadow and pale reflection of someone greater, but God allowed them to be those through whom He gave us life and we are always grateful to Him and them.

The thought I just had is that just maybe, it has been a ploy of the enemy to make us focus on the absence of fathers, believing that therefore we have no figure to relate to, when in fact that is not truth, as Jesus told us that if we have seen and know him then we have seen and known the Father.

I do think Celia Lashlie is on to something as she begins to draw the nation’s attention to the mothers.  There has been such an emphasis on absent, dysfunctional, violent fathers, yet while everyone has focused on that and getting their kids out of harm’s way, the mothers have been lost in the middle and the importance of their role in the family overlooked.  “The hand that rocks the cradle rules the nation” has a basis!  Many of the strong deliverers of God’s people were also women, Mary was important, and it is interesting that in Revelation it is the woman waiting to give birth that the enemy is really after – I think we need to give attention to this image especially in this time.  We may not have had great dads but maybe we had a wonderful mother, so God in all His wisdom found a way to balance out our lives. True family is not just about fathers, but about fathers and mothers working together to raise a family that represents something heavenly. God is big enough to represent fathers, mothers and children, and to be related to by each in their own way - He knows how this works, He made them!

A lot of years ago now, in the middle of the move of God we had in The River and elsewhere, I was lying on the floor in a big hall alone as everyone else had gone to lunch, but there was so much of His presence I didn’t want to move just to eat.
In that place, quiet with my eyes closed, I saw this huge cloud filled with fire coming towards me.  As it came it constantly changed shape, and I could see that He was giving me a glimpse of the wonder of who He actually is.  It billowed and swirled and sometimes had huge arms that reached out, and then changed again to something that encompassed everything I had ever known and then some!  This is my picture of my heavenly Father – full of power, glory, fire, light, constant movement, and yet with arms that reach out to me in love – He will never fit the gap of an earthly father, but is able to become my all-in-all, my source, and I can find rest in His arms.

I hope your Dad is as big as my Dad!

The picture below is of something called a 'star nursery'! 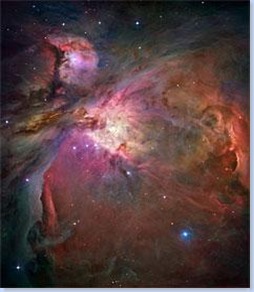 Posted by Judith Grobelny at 11:27 AM No comments: