LOST BETWEEN THE TWO 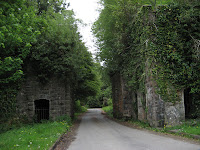 There is a call and an instruction for a time of confusion and trouble, when there are 'multitudes in the valley of decision'. This is how it reads in Joel 2:17 & 18:

Let the priests, who minister before the Lord, weep between the temple porch and the altar.

Let them say, "Spare Your people, O Lord. Do not make your inheritance an object of scorn, a byword among the nations. Why should they say among the peoples, 'Where is their God?'"

Then the Lord will be jealous for his land and take pity on his people.

I have thought much about what it means to be in this place between the porch and the altar in this modern time, especially as I see many called to a place they do not understand - somewhere between the religious church structure and those who simply live in the world with no knowledge or thought of God at all.

There are individuals, and whole groups of people, beginning to move into this place, many wondering how and why they have found themselves there!

Is it possible that in this day, as nations are invaded with much that is not of God's Kingdom, He is placing people in order that they will have a clear view and begin to cry out for Him to come and be the answer?

Is it possible that in this very moment, those who feel most displaced are actually being divinely placed?

Is it possible that in these days when there is no actual temple building and as Paul says in 2 Corinthians 6:16 "... For we are the temple of the living God..." that a place has been established for those who will cry out for the lost, the broken, the sons and daughters who have not yet found their Father and His family?

Maybe it is worth considering our position and our hearts today if we find ourselves somewhere between two places with no earthly way of reconciling this position or explaining it. Is it time to give a sacrifice of prayer and praise from this place, exactly as He asks?

Posted by Judith Grobelny at 3:20 PM